DISCLOSURE: This post may contain affiliate links, meaning when you click the links and make a purchase, I receive a commission. As an Amazon Associate I earn from qualifying purchases.

Air hockey is quite a famous game. It is featured in almost every arcade or game center in the world and people from all over the world play the fun 2 player game with their friends. If you aren’t familiar with it, air hockey is a very simple game which consists of two players that play against each other by holding one striker each and get points by using the striker to strike the puck into the opposing player’s goal.

Air hockey is a very fun game for parties and to play with friends when they come over, which is why a lot of people purchase them. If you’re interested in buying an air hockey table, here are some things you need to know before buying one:

Here are some of the best Foot Air Hockey Table: 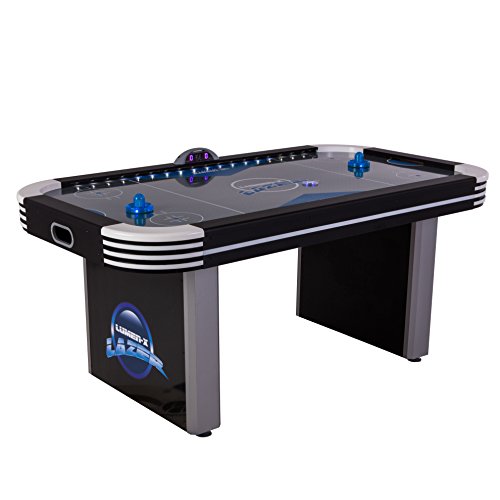 The Lumen-X lazer is a flashier choice as compared to other simple hockey tables. This one features in-rail LED lighting along with other fun features as well, which include fun and tense in-game music as well as interesting flowing effects that enhance the table’s beauty and make the game feel a little more competitive. The table also features a digital scoring system that helps with keeping track of score and also removes chances of any of the 2 players increasing or decreasing the score to their benefit. The Lumen-X isn’t the easiest to assemble, but it isn’t difficult either. The legs of the table are wide and sturdy, meaning that the table will refrain from moving when players are playing unless too much force is applied.

One interesting feature is that it possesses is its double motors, which provide rapid air flow that actually makes the game more intense and fast rather than just making it plainly smooth. This makes playing with friends even more fun and chaotic than it usually is, which leads to some good laughs and competitiveness. The table also features its own custom accessories like, obviously the puck and the striker, but also other things that light up the table and illuminate the room, such as the two ultra-bright stickers. The normal accessories like the puck are also flashy, as the puck itself is one that lights up. These bright colors and music also help the table give a more arcade like experience when playing at home. It is also fairly light in weight, which allows for easy portability. 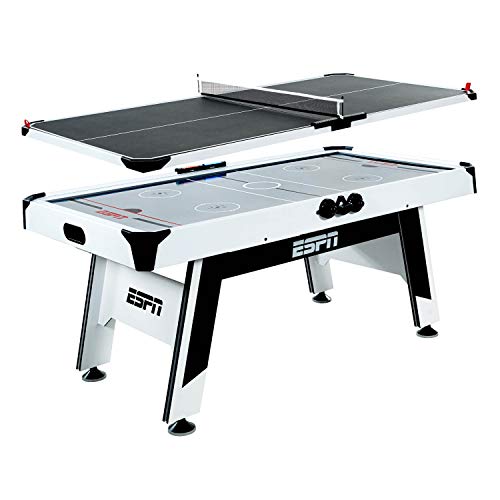 If you are into sports, you have undoubtedly heard the name ESPN. But what you might not have known is the fact that they also make ice hockey tables and other table games as well. This table is an excellent choice, whether you are buying it for your arcade or game center, or for your home for your kids or top play with friends. It consists of a sophisticated LED scoring system, one that is more unique in design as compared to the others. It also features lighting and other sound effects that help to give you the most arcade like experience that you can get at home. It is made with sturdy and durable materials that will last you long enough for you to get your money’s worth.

The surface is very glossy and provides you with good uninterrupted gameplay, as the surface will prevent the puck from bouncing all that much. Because of its complicated but intriguing design, it can be little difficult to assemble as compared to some other tables, however it shouldn’t be that much of a problem once you consult the manual given along with the table. But above all else, surely the best part about this product is the fact that it also doubles as a table tennis table due to the attachable table tennis top that it features, meaning that the table allows you to play two games. It also comes with all the accessories that you’ll need, for example the puck, striker, net, racket etc. meaning that you won’t have to buy the items for both games separately. This table is a good option for those looking to invite friends over. 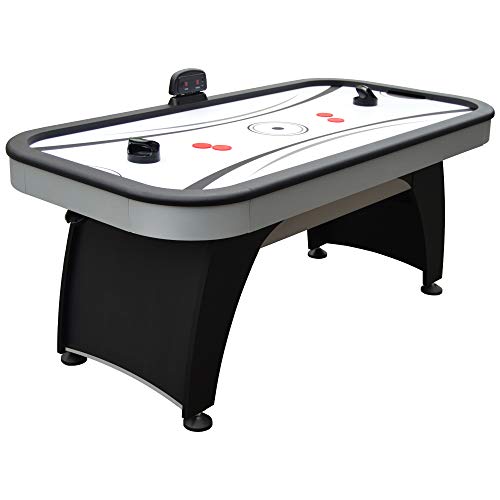 One of the most attractive things about this table, is the fact that its surface remains unscratched for a fairly long time, even after all the impact the table faces regularly. This is a good thing as the scratches somewhat decrease the beauty of the table, and also make the surface less smooth. This table is provided with a steady stream of air, as it consists of about 2160 holes which allow the surface to produce low friction. It is fairly easy to assemble and a lot of people will like the simple hockey field design on it, especially children. The Hathaway tables are made to last, having been made in America, but being made of materials that have been imported from multiple parts of the world.

The legs of the table are also fairly sturdy and ensure that you and your opponent will be able to play steadily. The legs and the base of the table are just as easy to adjust as they are to assemble, so you should have little to no problems on that front as well. This table features motion detecting scoring as well, minimizing the chance of any cheating when it comes to scoring. This model also features a digital scoreboard and an automatic puck returner, meaning that you won’t have to fish the puck back out from the table every single time someone scores. There is little to no lighting on the table, so it can be good or bad depending upon your choice. The popular table features the needed accessories with it, meaning that you won’t have to buy them separately.

This is a good 6 foot air hockey table option for homes as it is designed in a beautiful manner that would fit most homes, especially those that feature wooden furniture. Aromzen Midtown table is made from strong and durable wood and its appearance is also very wood-like, which is why it would go well in homes with wooden furniture. The design on the table is also very simple, but not too simple as to make the table look bland and no fun. The simple star design is one that many children would like, and it would catch the eye of adults as well. The table features digital scoring, which is a simple way of avoiding any cheating when it comes to counting the score.

The puck return system is very simple as well. The puck is delivered right next to the person that concedes a point so that they can resume the game efficiently, as compared to having to put your hand through the table to grab the puck each and every time. It is fairly easy to assemble as it doesn’t consist of all that many parts. The table consists of two broad legs that keep it in place, allowing you to play in a stable manner. The surface is also smooth and is scratch resistant, which allows it to remain smooth for longer as compared to tables with weaker surfaces. This model provides sufficient air flow for smooth gameplay and one that doesn’t feature too much friction. It also features its own pucks and strikers along with it, so you won’t have to go through buying those separately.

In conclusion, there are many 6 foot air hockey tables for you to choose from, and although it may not be as easy to decide on buying a specific one as it may sound, you can be sure that you will get what you are looking for if you consult the tips given above. Air hockey tables aren’t the most expensive things in the world, however there are many cheaper options, but keep in mind that the cheaper options might not be as good as the popular ones. What’s important is that you are satisfied with your choice, and that you enjoy your time playing with your friends.